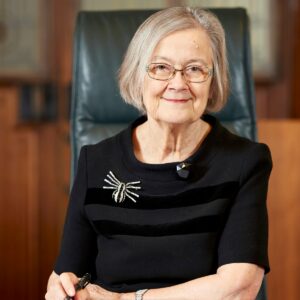 Brenda Hale retired as President of the Supreme Court of the United Kingdom in January 2020. After teaching law at the University of Manchester (while also practising for a short time at the Manchester Bar), then promoting the reform of the law at the Law Commission, she became a Judge in the Family Division of the High Court of England and Wales in 1994. In 1999 she was appointed to the Court of Appeal and in 2004 became the first and only woman member of the appellate committee of the House of Lords or ‘Law Lord’. In 2009, the Law Lords became the Justices of the Supreme Court. She was its first woman Justice, Deputy President and then President. She is also President of the United Kingdom Association of Women Judges and a past President of the International Association of Women Judges. She has enjoyed working in all fields of the law, but her principal interests remain in family, welfare and equality law. Early in her career, she served as a presiding member of mental health review tribunals and then as a member of the Council on Tribunals which used to supervise the vast array of administrative tribunals as well as public inquiries.